Icteria virens
Passeriformes
Members of this diverse group make up more than half of the bird species worldwide. Most are small. However their brains are relatively large and their learning abilities are greater than those of most other birds. Passerine birds are divided into two suborders, the suboscines and the oscines. Oscines are capable of more complex song, and are considered the true songbirds. In Washington, the tyrant flycatchers are the only suboscines; the remaining 27 families are oscines.
Parulidae
This large group of small, brightly colored songbirds is a favorite of many birdwatchers. Wood-warblers, usually called “warblers” for short by Americans, are strictly a New World family. Most of the North American members of this group are migratory, returning in the winter to the tropics where the family originated. Warblers that nest in the understory tend to have pink legs and feet, while those that inhabit the treetops usually have black legs and feet. North American males are typically brightly colored, many with patches of yellow. Most North American warblers do not molt into a drab fall/winter plumage; the challenge posed to those trying to identify warblers in the fall results from looking at mostly juvenile birds. Their songs are generally dry, unmusical, often complex whistles (“warbles”). Warblers that live high in the treetops generally have higher-pitched songs than those that live in the understory. Warblers eat insects gleaned from foliage or captured in the air. Many supplement their insect diet with some seeds and fruit, primarily in fall and winter, and some also eat nectar. Most are monogamous. The female usually builds the nest and incubates four to five eggs for up to two weeks. Both members of the pair feed the young.
Fairly common summer resident east.
Source of Bird Audio

The Yellow-breasted Chat is the largest wood-warbler. While it is generally regarded as a warbler, it has many non-warbler characteristics. It has a large, heavy bill, unlike many warblers; males and females look alike; and its unusual song has similarities to that of a thrasher or an oriole. The Yellow-breasted Chat does have typical warbler coloring, however, and is plain olive above with a yellow throat and breast and a white belly. It has a white line between its yellow throat and its olive-gray head. A white eye-ring that extends forward gives it a spectacled look.

Yellow-breasted Chats are closely tied to willow thickets, brushy tangles, and other dense, understory habitats. In Washington, they are found in the arid parts of the state, usually at low to medium elevations around streams where this dense, low vegetation grows. They are often found at the ecotone between the forest and steppe zones.

Yellow-breasted Chats do not typically form feeding flocks. When foraging, the Yellow-breasted Chat takes food from the foliage and holds the food with its foot while eating, a behavior not observed in any other warbler species. One of the best chances to see a Yellow-breasted Chat is during its flight display, when the male bursts out of the brush and flies around in the open, with its legs dangling and wings beating in a slow, butterfly-like flight. His song is very loud and distinctive, and he may sing all night long during the height of the breeding season. The song can sound like hoots and whistles, in a repeating pattern similar to that of a mockingbird or thrasher.

Like most warblers, Yellow-breasted Chats eat insects. They also eat fruit, which can make up over half of their diet at certain times of the year.

Yellow-breasted Chats occasionally nest in loose colonies. Their nests are well concealed, and are usually from 1 to 8 feet off the ground. The female builds a large, open cup, with a base of leaves, straw, and weeds. The inner nest is a tightly woven cup of bark, stems, and grass. The female incubates 3 to 4 eggs for about 11 days. Both members of the pair feed the young. The young fledge about 8 days after hatching, and most pairs raise two broods each season.

Yellow-breasted Chats winter in Mexico and Central America, although they are recorded on the East Coast of the United States in most winters as far north as New England. They do not appear to remain on the Northwest coast in the winter, as there are only three confirmed Northwest winter records, all from southwestern Oregon.

Although Yellow-breasted Chats host parasitic Brown-headed Cowbirds, their current population is considered stable. In Washington, Breeding Bird Survey data show a non-significant decline since 1980. They historically bred in small numbers in the western Washington lowlands and may still do so on occasion. 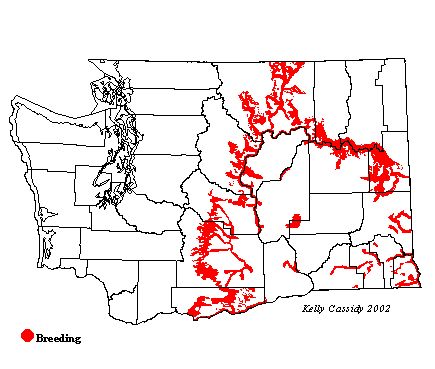