Tringa incana
Charadriiformes
This is a large and highly varied group of birds that do not have many outward similarities. Most are water birds that feed on invertebrates or small aquatic creatures. The order is well represented in Washington, with seven families:
Scolopacidae
This large and diverse family of shorebirds is made up mostly of northern breeders that migrate long distances. Their highly migratory nature leads them astray fairly frequently, and rarities often show up outside their normal range. Many of these mostly coastal birds forage in relation to the tides, rather than the time of day. They use a variety of foraging techniques, but the most common techniques are picking food from the ground or water, or probing into wet sand or mud. Those that probe generally have sensitive bills that open at the tips. Most members of this group eat small invertebrates. Many make dramatic, aerial display-flights during courtship. Nesting practices vary, but both parents typically help raise the young. Clutch size is usually four, and both parents generally incubate. The young are precocial and leave the nest within a day of the hatching of the last chick. Most feed themselves, although the parents generally tend the young for a varying period of time. The female typically abandons the group first, leaving the male to care for the young until they are independent.
Fairly common coastal migrant.
Source of Bird Audio

Wandering Tattlers nest in the far north by rocky mountain streams. During migration and winter, they inhabit rocky coasts, reefs, jetties, and breakwaters.

Wandering Tattlers are basically solitary birds, on the ground and especially in flight. They bob and teeter while feeding, and move nervously and quickly over rocks, probing for active prey on the surface. On the breeding grounds, they walk or wade along streams to find food. The Wandering Tattler gets part of its name from its practice of giving alarm calls when perceived threats are nearby, alerting other shorebirds to the danger. Its call is a series of clear, hollow whistles, all on one pitch.

The nest of the Wandering Tattler is located on the ground in a hollow in rocks or gravel, usually near a stream. It is a shallow depression that may or may not be lined with small twigs, rootlets, or leaves. Both parents help incubate the 4 eggs for 23-25 days. Once hatched, the young leave the nest within a day and can feed themselves immediately. Both parents tend the young, although within a week or two, one parent leaves. The remaining parent tends the young until they are independent.

Long-distance migrants, Wandering Tattlers travel from Alaska and northwest Canada to the southern California coast and beyond, with some birds crossing the Pacific Ocean to spend the winter in Australia and on islands in the South Pacific.

The Canadian Wildlife Service estimates the population of Wandering Tattlers to number 10,000 birds, with half of that number breeding in Canada. They are widely dispersed across their breeding and wintering range. This distribution makes the population difficult to survey, but probably also helps their numbers to remain stable.

Wandering Tattlers are common migrants on the coast of Washington. They are rare in Puget Sound and other parts of Washington. In the spring, they are common from mid-April to mid-May. They are usually gone from the Washington coast by the second week of May. The post-breeding migration is more protracted, with adults common on Washington's rocky outer coast from mid-July into August. By the second week of August, most of the Wandering Tattlers coming through are juveniles, and are common into October. 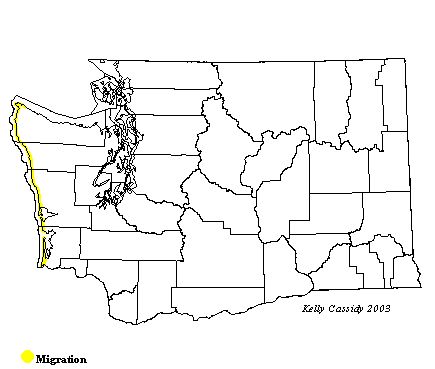