Cistothorus palustris
Passeriformes
Members of this diverse group make up more than half of the bird species worldwide. Most are small. However their brains are relatively large and their learning abilities are greater than those of most other birds. Passerine birds are divided into two suborders, the suboscines and the oscines. Oscines are capable of more complex song, and are considered the true songbirds. In Washington, the tyrant flycatchers are the only suboscines; the remaining 27 families are oscines.
Troglodytidae
The wrens of northern North America are small, brown birds, which make up for their drab colors with their complex songs. Active foragers, they generally search for food low in the understory or on the ground, where they use their narrow bills to probe in crevices for insects and spiders. They are usually solitary or in pairs and do not form flocks. Most species lay eggs in enclosed areas, either in cavities or covered nests. Usually the male begins a number of nests, which typically have coarse foundations upon which the actual nest cups may later be built. The female then selects one nest and completes it. Incubation is usually by the female alone, although both parents feed the young. One odd practice of wrens is their tendency to puncture the eggs of other birds, both of their own and other species. One theory to explain this, as well as the multiple nests, is that wrens strive to increase the number of empty nests in their territory. This may protect them from predators that might abandon an area after finding most of the nests empty. Many wrens hold their tails cocked up over their backs. Since many other birds also do this, the posture is by no means diagnostic of wrens.
Common resident. Uncommon winter east.
Source of Bird Audio

The Marsh Wren is usually not seen for long, as it pops up from dense emergent vegetation, only to duck back out of sight moments later. Small and stocky, with the classic wren tail held upright, the Marsh Wren is easily identified as a wren. The upperparts are brown with a black patch streaked with white, and the tail is barred with black. In Washington populations, the shoulders are brown, unmottled, and much duller colored than those of Marsh Wrens in eastern North America. The belly is gray-brown, lighter than above. The throat is light, and the white eye-line and brown crown are field marks to note.

Emergent vegetation is the most significant component of nesting habitat for Marsh Wrens. They inhabit freshwater and saltwater marshes, roadside ditches, and small agricultural runoff sites, and will even nest in invasive plants such as purple loosestrife and reed-canary grass. In winter, they frequent a wider variety of habitats, including wet meadows and coastal dune grass. In eastern Washington, early nests are typically built in cattails, but after mid-June, over 90% of the nests built are in bulrush. (Bulrush grows in deeper water than cattails, and is more likely to be under water after the marsh has dried up around the shallower cattails.) In western Washington, Marsh Wrens inhabit wetlands with both cattail and bulrush, and have also been known to nest in emergent hardhack.

Marsh Wrens glean food from the stems of dense marsh vegetation, from the ground, or on the water's surface. They usually forage out of view, hopping up for brief moments when they can be seen by patient observers. Like other wrens, male and female Marsh Wrens of all ages will destroy the eggs of their own and other species. Washington's Marsh Wrens build between 14 and 22 incomplete 'dummy' nests, which may help with predator avoidance. The dummy nests are also used throughout the year for shelter, and dummy nests of resident birds tend to be sturdier than dummy nests of migrants who do not use them for winter shelter. In fact, western Washington Marsh Wrens, which use their dummy nests for shelter in the winter, spend significantly more time building them than their eastern Washington counterparts who migrate and don't need the winter roosts. Male Marsh Wrens have up to 200 songs, which they sing almost continuously during the breeding season. Their songs resemble the sound of a sewing machine.

Like most wrens, Marsh Wrens eat primarily insects and spiders. They eat aquatic insects as well.

Marsh Wrens are polygamous, with about half of the males in Washington having two or more females on their territory at one time. The male builds many unfinished nests and then shows them to the female, who selects one and adds a lining to it. This process starts in March in western Washington and in early April in eastern Washington. The nest is anchored to standing vegetation, 1-3 feet off the ground, and is an oval mass of grasses, cattails, and sedges woven together with an entrance at the side. The lining is made of fine grass, plant down, and feathers. The female incubates 4 to 5 eggs for 13 to 16 days, and broods the young for about a week after they hatch. In western Washington, males help feed the young, but in eastern Washington, males don't help feed the early-season clutches. Later in the season, when there is less chance of attracting new mates, they will help feed. The young leave the nest after about 13 to 15 days. In western Washington, the parents continue to feed the young for another week or two. Once the young have fully fledged, the female will raise a second brood.

The populations on either side of the Cascades are considered separate subspecies and have a number of differences. Breeding Bird Survey records have shown a significant population increase throughout Washington from 1966 to 1991. Christmas Bird Count numbers have also been increasing recently, which may be the result of more complete coverage in Marsh Wren habitat rather than an actual increase of wintering birds. While Marsh Wrens readily colonize created wetlands and nest in invasive plants such as purple loosestrife, wetland loss and degradation are a concern for this species.

Marsh Wrens are abundant where there is appropriate habitat. During the breeding season, they are found throughout western Washington and in Grant and Adams Counties, the Yakima Valley, Grand Coulee, and along the Columbia River. In winter, they are still common in western Washington, even in small marshes. Most eastern Washington Marsh Wrens leave by mid-October and return in March, but some stay through the winter at lower elevation. 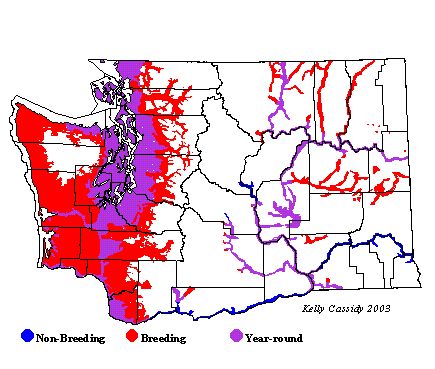